Indians first ventured into this land on the northwestern rim of the Great Valley as early as the 1400s. White explorers and long hunters like Daniel Boone first ranged across the wild and rugged Cumberland Mountains and down the untamed Clinch River in the 1760s.

But it was not until the signing of treaties with the Cherokee Indians in 1790, followed by the Tennessee’s admission into the Union as the 16th state in 1796, that settlement of this region by white pioneers began in earnest.

Migrating from the rapidly filling Eastern seaboard in search of new land and opportunities, they were a diverse mix, the American-born sons of English, Scottish, Welsh, and German immigrants, along with the occasional black slave. They found fertile farmland along the rolling river bottoms, and rich ground for hunting and trapping along the wooded mountains. 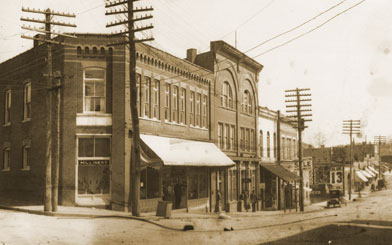 Anderson County was originally a part of Knox County, which once extended all the way to the Kentucky border. But by 1801 there were enough people in the region above Copper Ridge and Poplar Creek to warrant the establishment of a new county, named Anderson for Judge Joseph Anderson. A county seat was decreed and built that year, near a popular spring and ford on the north side of the Clinch.

The town was originally named Burrville for Aaron Burr, but in 1809, in the wake of Burr’s disgrace, it was renamed Clinton for Thomas Jefferson’s vice president, George Clinton.

For the next sixty years the county grew only slowly, the people enduring the hard toil and enjoying the honest pleasures of a simple, almost primitive rural/agricultural lifestyle. As in most of East Tennessee, the mountainous terrain and the settlement and land distribution pattern did not lend themselves to the sprawling farms and plantations which, in other parts of the South, relied on slave labor. Though slave holding was not unheard of here, it was a distinct minority position: when the slavery issue pulled the South and Tennessee into secession and war in 1860, Anderson Countians found their loyalties bitterly divided.

The County suffered great turmoil and desolation during the Civil War years. But change came rapidly in the decades following the War.

Agriculture resumed and prospered. More significantly, the mining of coal from the mountains developed into a major industry. Coal and land companies dominated this region, and communities, centered around the mining life, grew up at Coal Creek, Beech Grove, Briceville, and Rosedale. The life was hard, with long hours of toil and regular loss of life in cave-ins and other disaster.

The coal industry has declined in recent years, but the sturdy descendants these mine workers, still living in the old communities, are a living heritage of this demanding way of life. The coal industry in the north of the county brought growth to Clinton, as well. The railroad from Knoxville to the coal fields reached Clinton in 1869, providing the town uncommonly easy ingress and egress for what had been, still, an isolated area. The legal affairs of the mining operations were conducted in the county seat, and there was general, steady commercial and industrial growth.

A colorful chapter was written in Clinton’s history from 1895 to 1936, during the era of pearling on the Clinch River. Freshwater mussels harvested from the river nearby produced superior and much sought after pearl, bringing in wholesale buyers from around the country and giving the town something of a cosmopolitan air. This was also the heyday of the famous resort hotel at Oliver Springs, in the county’s northwest corner.

The very face of Anderson County changed in 1934 when the Tennessee Valley Authority, one of the more ambitious New Deal agencies, chose a site near Coal Creek for construction of its first major dam. The dam was named for Nebraska Senator George Norris, a major TVA backer.

The huge project provided thousands of jobs and kept the county relatively prosperous during the heart of the Depression. Many families suffered the tragedy of forced evacuation, however; and whole communities were dismantled and moved to make way for the coming reservoir.

When the Norris Dam floodgates were closed in 1936, the region gained a source of cheap electricity for the vast rural areas which had done without up to that time. But the most important result was the control gained over the mighty Clinch River, which had annually brought havoc-making floods to towns and farmlands downstream. Also in 1936, the town of Coal Creek gained the new name of Lake City, the beautiful town of Norris was established, and a major fishing and recreation lake was formed which laid the foundation for Anderson County’s water recreation industry. Ironically, the change in water temperature below the dam resulted in the demise of the freshwater mussels and the related pearling industry in Clinton.

Drastic change again came to Anderson County in 1942 with the creation of the city of Oak Ridge, originally a secret wartime project and now the largest community in the county. At the height of World War II, thousands of construction workers, technicians, and top nuclear physicists were shipped to the huge complex in the county’s west end, chosen for its isolation and seclusion. Only a few knew the true nature of the project, and all were sworn to secrecy.

Three large plants were built, along with administrative buildings, barracks, houses, churches, stores, and other facilities needed to accommodate the 75,000 people at work at the height of the Manhattan Project. It was not until the dropping of atomic bombs in 1945, which brought an end to the war with Japan, that the inhabitants learned what they had been working on.

After the War, the Oak Ridge plants remained in operation as research and nuclear production centers. Many of the workers stayed on, started families, and continued the community life they had begun together. In 1955, the federal government sold the residential and commercial sections of the city to private concerns; in 1959 the town was incorporated. Oak Ridge has continued to grow as a research and technology center of international stature.

Anderson County likewise continues to grow and prosper on the firm foundation of Appalachian tradition and 21st century technological foresight. New industry, new business, and new residents find this area to their liking, with its beautiful surroundings and friendly, industrious people. The future of Anderson County looks as varied, interesting, and bright as its past.

It’s a great time to be in Anderson County!